Were we ripped off?

Government sold the power stations off to foreign interests.

Did they pay the money back to the taxpayer? Not on your life. The money was needed badly to meet growing Government expenditure. That's why they were sold.

Why else would a government sell off the assets of the country? How about this one - they were not depreciated and no money was set aside for replacement. As the time came for replacement they were spending money like drunken sailors so none was available to replace even basic infrastructure. So, sell the family silver - obviously.

What does the taxpayer end up owning? Not a lot.
Posted by DZ at 15:28 No comments:

You couldn't make it up

The UK has ownership of 25 of the installations. It boils down to this:

Still with me? The UK-owned wind farms represent 0.74% of the total generated output. And only when the wind blows, most likely.

The economics of the world’s biggest offshore wind-farm project are “on a knife-edge”, the chief executive of one of the companies behind it has warned, casting doubt on the UK government’s energy strategy.

E.On UK, the British arm of the German energy group, said the viability of its London Array project, a planned 1,000MW wind farm in the Thames estuary, had been called into question by the falling prices of oil, gas and carbon dioxide emissions permits.

Should we care, if we don't own it?

Brilliant. UK ownership is reduced, but we are allowed to use the generated energy, when the wind blows.

But where is the 1000MW back-up coming from when the wind doesn't blow?

More nuclear, coal or gas. Shouldn't we be economising on that?

Some thoughts and an HTML table experiment

When travelling by train from London to Bristol one passes through Didcot, where a whacking great powerstation lies just to the north of Didcot Parkway station. It looks quite good, the owners RWE (FRG) are tidying up the landscape. Thanks.

But why is it there, in Oxfordshire? It doesn't sit on a coal mine. And it's quite big. Probably, one has to look no further than the site of a former air base at Aldermaston, a few miles to the north. My godfather was a 'metallurgist', he said, and worked at Harwell. He didn't tell me that he worked at the Atomic Weapons Research Establishment. They needed a lot of electricity, so I suppose Didcot was the solution. Harwell/Aldermaston is also the site of the Joint European Torus experiment in the generation of power through fusion. Legend has it that Didcot rattles, wheezes and nearly flakes out when they fire up the torus, and it manages to produce enough power for a 20 watt bulb. Mind you, it does that in a few picoseconds or whatever. And then nobody can go near it for months. But they'll get there in the end. Of course, like Didcot, the AWRE Aldermaston has been sold off.

Windmills all over the place, against the wishes of the residents in many cases, and we own 0.7% of the output. Who has been shafted, and by whom?

Who owns the generating stations? 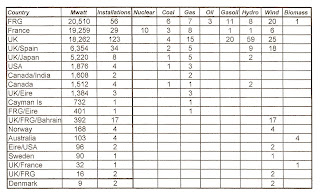 
Nuclear: only 10 stations, all owned by EdF. That must rate as the greatest triumph of the anti-nuclear Movement, even if there are worries about the disposal of waste. France itself has 57, producing 88% of the county's electrical power at a low price to the public. French companies also built the two units at the Koeberg power station outside CapeTown.

Other Hydrocarbons: again, the 'Big Three' predominate in ownership of stations using gas, oil, gasoil (and including diesel, kerosene (paraffin in GB-speak): FRG (27); France (19); and UK (39 - a big number but this includes a number of small local powerstations generating <10 MW).

Hydro-electric: the only useful renewable power source, with three large installations over 100 MW and the rest mostly under 20 MW. Generally speaking, hydro just keeps going, given a moderate amount of rain, or a river that has a generous supply somewhere. There are 81 installations, mostly owned in the UK (59). Another aside, the Inga I and Inga II powerstations (1,774 MW installed base) on the Congo River are in a bad state of repair, but produce around 700 MW today. They are being re-furbished currently (Inga III and Inga IV and could produce around 50,000 MW (60% of the total UK pwer output).

Wind: when you really want it, it never obliges. Ask any sailor who likes to race. It can be very frustrating. Anyway, there are 97 installations (groups of windmills) with the bulk of ownership associated with UK: UK (25); UK/Spain (18); UK/FRG/Bahrain (17). The FRG is well represented (20) and France (6). The only problem with wind is that it needs back-up, when there is no wind, the users have to get their power from somewhere, so there has to be excess capacity available within the system. But is can still save on oil and gas, nevertheless.

So, have we been shafted through the sale of powerstations to foreign interests? The opinion here is a resounding YES. More on that in a while. Building up slowly to the Opinion Page.

Coming next: How much power is generated from the various fuels?
Posted by DZ at 08:54 No comments:

What motive power is used in UK power stations? 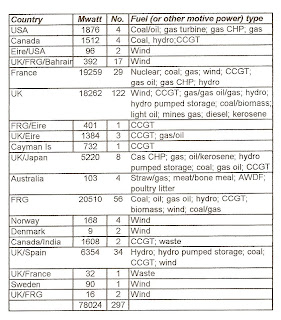 Just about anything that burns or will turn a wheel is the answer to that question.

Around the early '90s there was a brief surge of newspaper interest in generating power from chicken manure but public interest soon waned. But here it is, and owned by an Australian company that is focussing on transforming animal waste derived fuels (AWDF), as well as straw. The ideas have been around a long time, so one can't call it innovative but they made it work and hopefully at a profit. Good one.

The only other innovative one is the burning of part of London's waste at a power station owned by a joint UK and French company.

The rest of the power sources are conventional: nuclear, coal, gas, hydro and wind.

As one would expect, the two big electricity producers FRG (20,510 MW) and France 19259 MW) are obtaining the bulk of their supply from nuclear (France) and hydrocarbons (FRG). The UK (18,262) has a very mixed bag of supply from gas, coal, wind and hydro.

[Sorry about the fuzzy table outline. I used jpeg, because I haven't yet learnt how to create a nice table in HTML].

Coming up: How much power is generated from each energy source?
Posted by DZ at 07:44 No comments:

Who owns the MegaWatts?

There was a comment on Old Holborn today, perhaps, where a correspondent remarked that Germany “owned” our generating capacity. Sadly, I didn’t make a note of the reference and can’t find it now.

So, does Germany own our generating capacity? Have a look at the table:

The answer is: not exactly.

Power stations wholly-owned by Germany (FRG) have the biggest output (20,510 MW), followed by those belonging to France (19,259 MW) and then the UK (18,263 MW). However, by splitting hairs, and without any knowledge of the proportional share ownership, if we add in the capacity of jointly-owned UK/foreign capacity, the UK probably has its nose in front.

But is that cause for celebration. Not really. The devil is in the detail. The really big power stations are almost all foreign-owned, nuclear, coal and gas. The smaller ones, and the innovative ones like wind, biomass, are mostly UK-owned. So that’s OK, in 300 years we will be leading he world ….. or maybe not.

Upcoming: who owned what type of power station
Posted by DZ at 14:24 No comments:

I got the idea from Old Holborn where the blogger quotes Mandelson making adverse comments on British businessmen. So I started wondering about the nature of British business, and British businessmen. To keep it short, and as ethnocentric as possible, it struck me that IF the businessmen operating here were not British, THEN why should they really care about anything except the orders of their foreign bosses. So, Mandelson could be right, in a cack-handed sort of way. Obviously, the next question is: who owns British industry? The question after that, natch, is what happened to the industry we had at some fixed date earlier, like 1945?

So the following was added to OH’s comments section:

Yes, but what is British business?

Take electric power generation, for example, a very strategic British business. A glance at BERR data shows that there were 298 generators in service at the end of 2008 providing an installed max output of 78,024 MW. Of that capacity:

"His Sliminess himself, Dark Lord Mandy of Airstrip One, has been charged by the Brown Gorgon with the task of promoting British business. His idea of doing this is to tell us that nobody in this country is any use at running a business"

Well, OK, but did anybody get a chance before the profit-takers got in?


The follow-up will be more on electric power generation, and we will go on from there.
Posted by DZ at 11:32 No comments: